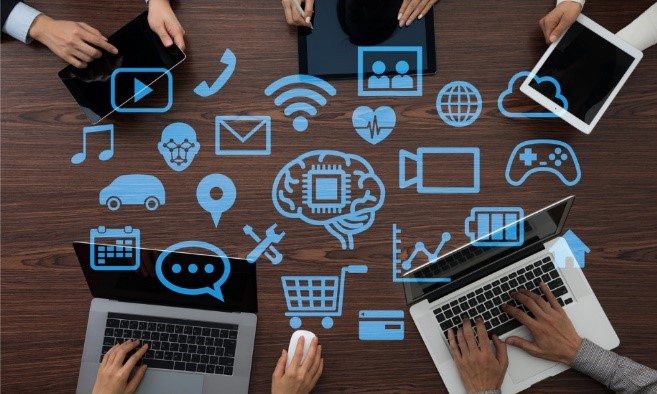 We are in a post pandemic state. Everything has mostly returned to normal; I no longer carry a stash of masks around, I don’t get tested every time I cough, and, sadly, the days of no rush hour traffic are long gone, but there is one thing from pandemic times that hasn’t dwindled: our technological advances. During Covid, we relied heavily on electronics not only to help us stay connected to one another, but also to be able to get things done without being around other people, and for once, technology had to catch up to us.

Businesses needed to quickly progress further into the tech world and IT engineers rapidly created solutions we needed. Suddenly, we were helping our kids go to school online, we were ordering groceries through virtual grocery stores, we were relying on ATMs and online banking features more than ever before, and we were utilizing payment apps like Venmo, Paypal, ApplePay, and Facebook Pay. The technological capacities of our society skyrocketed. The old proverb rung true again: necessity is the mother of invention, but with technology, necessity is often times the mother of learning how to use it.

I am a millennial who feels like a xennial, the subgroup of the millennial generation that also shares significant characteristics with Generation X, particularly when it comes to technology, and although I am comfortable using electronic devices now, that has not always been the case. There are two times in my life that I can distinctly recall necessity throwing me into the depths of technology unknown.

I remember the first computer we got in our house. I was somewhere around 9th grade, and I watched my mom spend what seemed like hours setting it up. It was intimidating, and as excited as I’d been to get one, I rarely used it for anything because I didn’t know how. I’d recently taken typing class in school, but it had been difficult and seemed unimportant, so I regressed to the one finger chicken pecking method in the class whenever I could get away with it. Also around that time, AOL Instant Messaging was becoming huge, and I asked my mom to make me an account so I could chat with all my friends. I quickly became frustrated with IMing because no matter how hard I tried, my pecking approach to typing was not fast enough to keep up with all the chats going on at once.

One day, I was at a friend’s house while she was IMing, and I was watching her type faster than I had seen anyone type before, and she had all her fingers on the keys at once! It was clear what we learned in typing class had merit, and that was how she was able to chat so fast. Right then I realized I had to stop avoiding learning to type just because it was hard; things would actually be easier if I just gave it a chance. From then on, no matter how unnatural it felt for my fingers, or how slow I went, I was determined to keep my fingers on those keys until I was able to type as fast has she could in those chat boxes; I had found my mother of learning, my necessity. Eventually, I got it down; what was hard became easy and has been making things easier ever since. The same determination proved to be useful when texting came around.

But technology is about more than typing, so even though I had that down, I still didn’t dare try to use any other programs because I didn’t know what I was doing, and I was sure I would mess something up. When I went off to college, I had a brand new laptop that I barely knew how to use. It was really just for typing and printing papers. We used physical libraries with books to do research, and if we didn’t know something, we tried AskJeeves, which believe me, was a far cry from Google, but it’s was the best internet search engine we had.

Then came the day I had to make a PowerPoint presentation for a project. I honestly hadn’t even heard of PowerPoint before then, and I was panicking. Luckily, my older sister went to the same school and was able to help me, although truthfully, it quickly turned into her just creating the slides for me as I looked over her shoulder and told her what I wanted them to say. But the next time I needed to make one, she didn’t have time to help, and she told me to just figure it out, and it would be fine.

What I was envisioning in that moment was my computer inevitably crashing due to clicking a button wrong. That is the level of fear and discomfort I had with technology as a young adult. But, just like with typing, I once again found my mother of learning, my necessity: I had a PowerPoint project due, and I would probably have another one at some point after that. There was no escaping it, I had to give in and learn how to do it. So that’s what I did. And to my surprise, I did not make my computer crash by clicking something wrong…and I have yet to do that in all my years since then. But after that experience, something became clear for me, learning to use technology requires trial and error, and I can’t let it intimidate me, or I will forever be stuck in a state of struggle in this world.

I often hear that technology is just easier for younger generations, but I’m not sure I agree. I think it’s just that we, as my sister put it, choose to figure it out. Millennials and Generation Z were not actually born with technological knowledge; we learn by using our devices and googling what we don’t know. And people of all ages can do that. Technology is ever advancing and it has become a necessity in this society to be able to use it.

Just the other day, I was at the grocery store. After I rang up my items, I realized I forgot my wallet. I thought I’d heard my phone could be used to pay on the credit card device, but I wasn’t sure how it worked. I had two choices, be intimidated by my phone and leave, or figure it out so I would know how to do it in the future. I chose the latter, not because I have innate millennial technological knowledge, but because I had my early experiences with technology telling me that learning how to do this stuff is beneficial, important, necessary, and never as hard as I imagine; what better time to learn than when it can provide a pretty awesome convenience.

Covid may have catapulted us into having more electronic options than we would otherwise have right now, but it has also shown us that we can figure things out when we need to. Sometimes, learning how to use technology is uncomfortable at first, but the reality is when we avoid it, we are only putting ourselves in a position of frustration and struggle when we do ultimately have a necessity for it.